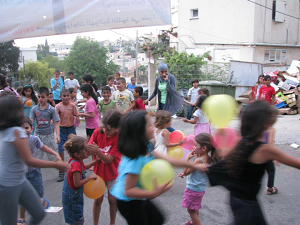 “Tamra”, located on the slopes of one of the hills of Lower Galilee, that has always been called “Al Sanayba`ah” by the locals, has a long history. Some say it dates back to 4 thousand years before the Byzantine era, while others cite Ottoman records from the beginning of the nineteenth century. I have only know of it since I was born, and I feel as if we were created together – the town and my soul – at the first configuration of the universe, where the union was crowned on the day I was born!

Why this historic introduction? For no specific reason, although I want to provide a brief overview of the town, why it arrived at the state that it is in and why the “Tamra Youth Forum” came to exist. I do not know if you know of this, but in all cases I am obliged to make this presentation.

Tamra is a Galilean town in the Western part of Lower Galilee in the District of Acre, with a population of approximately 33,000 people. It is 100% Arab. Tamra was not depopulated during the Nakba, although a few families moved to southern Lebanon. The town itself became a refuge for many who were displaced from their villages, such as the two adjacent villages of Al Damun and Al Ruwais, as well as the villages of Meyar and Al Hadtha and others. At the time of the Nakba, Tamra became renowned for the hospitality that it extended to refugees, who were accepted into the town as brothers. To this day, they are considered to be children of the town, and there is no difference between the “son of the town” or a refugee!

What concerns us from this history, as it relates to the present times, is that it helps to provide an explanation of the social environment in the city (which used to be a village). The arrival of a large number of refugees from neighboring villages to Tamra led to a high population density, where the population effectively doubled between 1948 and 1955. This coincided with the confiscation of lands, as was the case (and is still the case) for all Arab towns and villages inside the occupied interior, meaning that the population density was increasing while available lands were shrinking!

Since the establishment of the State of Israel on our remains, there was a clear policy to “transform the Arabs of Israel into water carriers and shepherds.” No-one is oblivious to the suffering of the Arab "citizens" of the State of Israel, in terms of racism, deprivation, and systematic denial of their existence as a minority that was the original owner of this land. If we take all these factors into account, in addition to over-population, unemployment and dire economic conditions, then the resultant environment is fertile for the spread of violence, drugs and weapons ... and other negative social symptoms. This leads society (no matter how civilized) to backwardness and primitivism. If you asked about Tamra a few decades ago, you would have heard about the kindness of its people, their good intentions and high morals. If you were to ask now about its conditions, you will receive an outline of the recent violence and crime.

This is what has happened in Tamra, where a policy of 60 years of neglect and racism has had a great impact on its people. In addition to the spread of violence, unemployment, drugs and weapons (especially in recent years), there has been an increase in familial intolerance in Tamra (where its people do not differentiate between refugees and the sons of the village or one family or another), in which any verbal altercation between neighbors is elevated into a family feud, a problem that has, on several occasions, resulted in murder. Except for shootings in broad daylight, robbery and theft, the unsupervised protection of the population does not prevent such phenomena. The fact of the matter has been noted by many analysts: the police are aware of those who engage in distributing drugs or trading weapons, but they turn a blind eye and do not perform their duties, as systematically as Quraish’s summer and winter trade migrations. As for the law, we already live in its shadow, in a state that was built on our ruins and robbed our people of their wealth and lands, a state of affairs that was then ratified under the pretext of law. The latest case of tragic violence witnessed by the town involved the murder of a youth by another approximately one year ago, in retaliation for the murder of another youth during a family altercation another year before the event in question (not that either of them is guilty of anything except carrying a family name). Tamra has witnessed a period of war and fierce backlash, similar to the Basus War between Bakr and Taghlib!

This is where we started. A group of you who refused to accept the “imposed” reality and decided to “impose” another reality, a reality that will make us proud of our country, our society, our parents and ourselves and restores our town’s historic reputation. We were the first protesters against violence, against the situation that we had reached and against what we had reduced ourselves to. We arranged a protest which was attended by almost one thousand participants from the local community from different families, ages and social standings. It was a protest against the murder of an individual in the prime of his youth.

A week after, a group of hundreds of youth, both male and female, marched with candles and torches to the house of the father of the deceased, who was killed in retaliation for the killing of another young man, in an attempt to calm the situation. To an extent we succeeded, not in stopping the attacks, but in intervening to calm the hearts of the family of the deceased, and to make them aware that the town’s youth will not tolerate another crime. This contributed to a cessation of the murders and resulted in reconciliation between the two families!

After we reached the point of exasperation, we studied the situation, and specifically what caused our blood to flow like water? Is our blood expendable depending on our family name? No, since the families are significantly interconnected, as all families are interrelated in a wide network that brings everyone together. So what had happened? How did Tamra become a foundation of crime and ruin? This is largely due to the environment that we previously 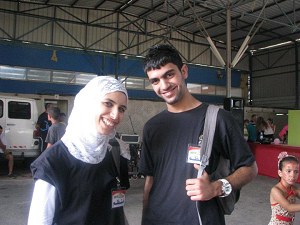 described, that was fertile for the spread of violence and other negative social symptoms. But we are human beings, and there are limits to the injustices that we can endure. The damaged cargo must be unloaded one way or another, as is the case in all human societies throughout the ages!

This is the point at which we started. The idea was that we would be an independent, non-political Tamra-based youth group, affiliated to Palestinian Arab society inside and outside the Green Line, and specifically to our Galilean town, Tamra. Our primary concern is to raise social, political and cultural awareness in our town, and not in adherence to this alien community that settled on our lands, but as an integral part of the Palestinian society, characterized by its rich and authentic civilization, and by a culture of giving that taught us to give ourselves to our community in order to make it a place in which we want to raise our children. We have to take the initiative as young and conscious Palestinian youth, and wherever there is a need, we are here to offer ourselves and our talents and abilities, individually and collectively and not just materially, even if there is a need to initially give our money to fund our town's progress and rehabilitation.

Our work, whether social, political or cultural, is to raise awareness and revive the values that the Israeli establishment tried to suppress inside us, such as volunteering, attachment to our land and our people, brotherly cohesion and the acceptance of others. As a group of young men and women, we represent all categories of Tamra’s community, social classes and different families. Even if we hold different political views and no matter how much we disagree, we are together on the path of unity.

Henceforth, we proceeded to fulfill important roles in several projects in our town, including: the annual Child and Family Festival of which we are one of the key organizers this year, the second Bikes Against Violence parade, the International Volunteer Camp which visited our town and in which we worked hard to transfer its message to the people of our town. We also organized Ramadan evenings and cultural and youth literacy events, as well as helping to organize the Scout’s march on the night of Eid, and lighting our town’s skies with balloons for the second consecutive year (an activity adopted by other towns such as Sakhnin and Baqa Al Gharbiyah).

Since we decided to be the agents of change in our society in Tamra, and confirming our sense of belonging to the Palestinian people, we started this initiative. We were one of the first to show solidarity with detainees and our struggling people, to revive different national events in our town and to condemn all attempts to attack our people and our sanctuaries. We took an active role in raising awareness at the cultural and political levels, through intellectual, cultural and political debates that focused on the opinions of youth specifically.

In terms of our outlook, the future appears fruitful and full of wellbeing, and when punctuated with difficulties we will ensure that there is success. We are here to draw a future that we will work hard to achieve, through organizing cultural evenings and various lectures in order to raise political and social awareness, as well as educational courses that revive hidden talents such as playing the violin, dancing and other ancient, authentic arts that are known to our people. We will also work with children’s volunteer groups, whether for educational or social purposes. Our path is long, and the promise that we made to ourselves must be fulfilled. Is it not the case that a promise made in freedom is an obligation?

And here it is possible to give to the Tamra Youth Forum!!!