News from the Giving For Change project

News from the Giving For Change project

Today, the community initiatives, that received community-controlled grant funding from the Giving for Change project in 2021, have come a long way in achieving their goals, through the implementation of their various activities we are pleased to share with you "Where they are right now".

The initiatives, which seeks to build a cooperative capable of being an economic and social alternative for all its affiliated members, succeeded in building a greenhouse, and they were able to collect the required amount for this through the grant from  Dalia and the support of Sharaka Youth Forum. They now finishing the last touches to the greenhouse's cultivation, using the principle of agroecology, for a range of seasonal crops. The cooperative does not forget its social role, as the farmers are preparing for a community activity titled: The Farmers’ Gathering, which aims to define the meaning of cooperative work and devote the concept of agroecology practically to the land. Advanced training specialized in agroecological cooperatives is also being provided. 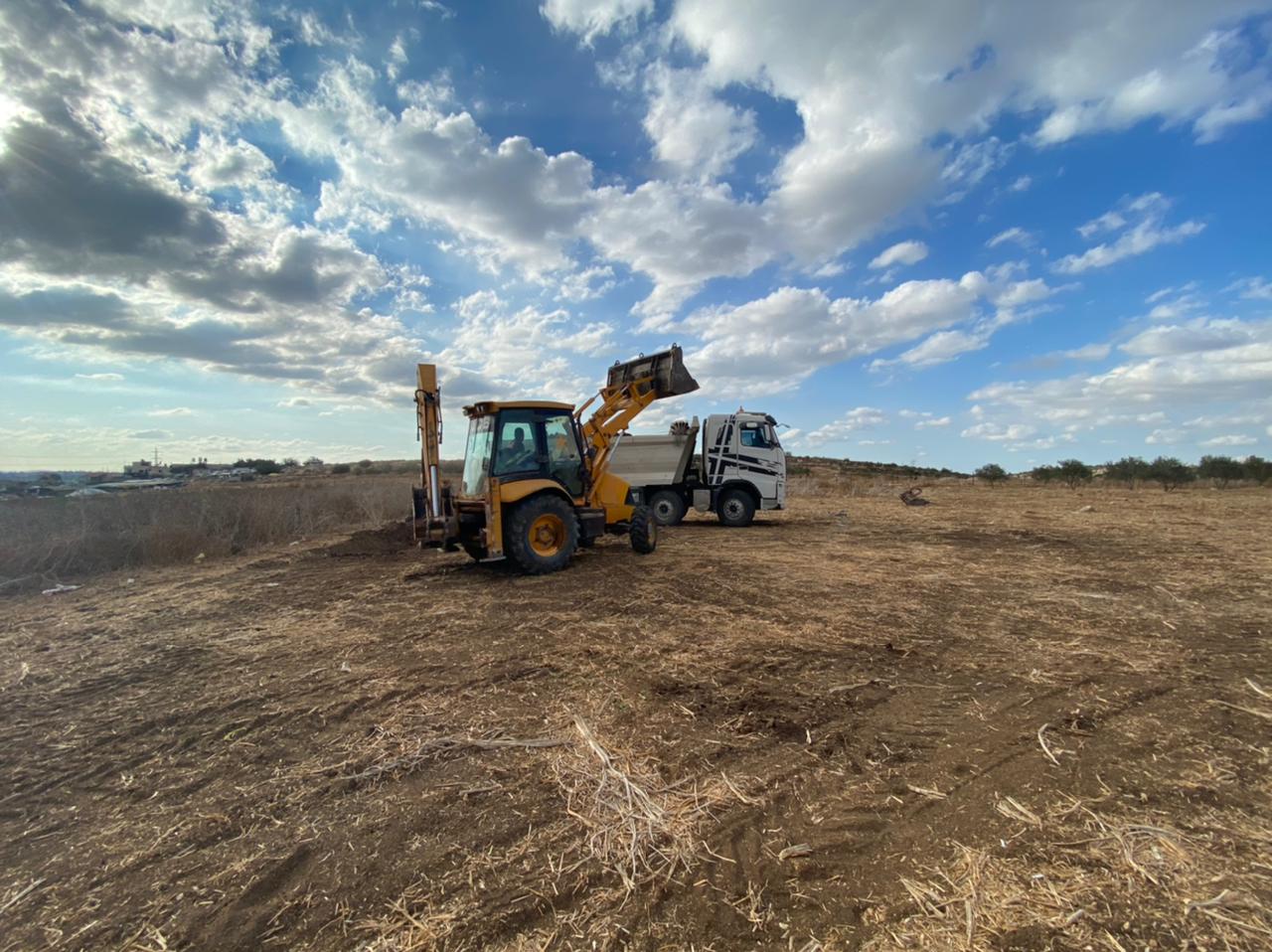 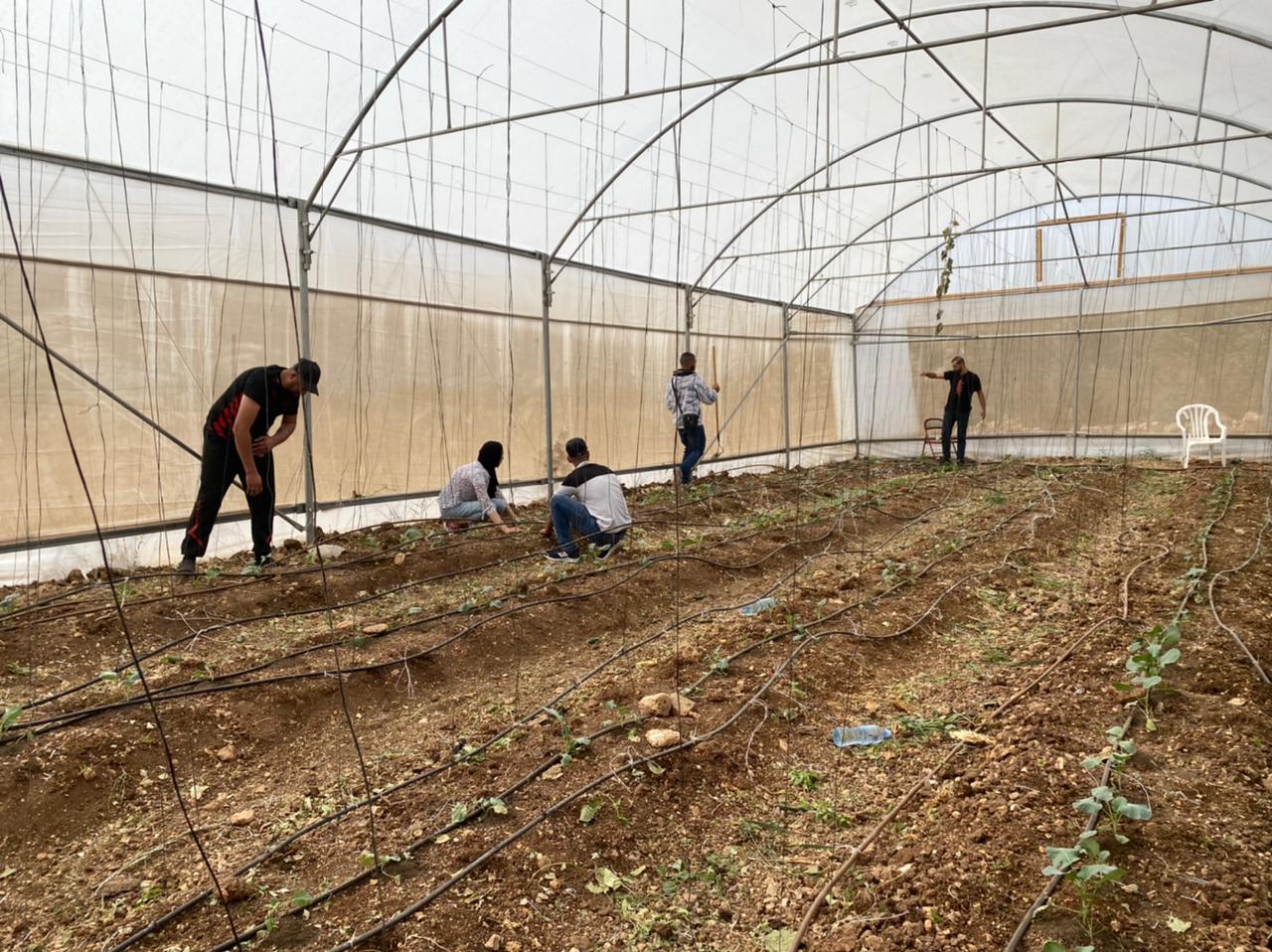 Consistent with its objectives, the cooperative is succeeding in being an economic and social alternative for all its affiliated members, adopting agroecology, and committing to the importance of workmanship, and spreading awareness about the importance of this economic system that aims to support the independence of youth and their economic empowerment. The cooperative is preparing the greenhouse with all its requirements, through the grant they received from the Dalia. They succeeded in planting high-quality, healthy, and chemical-free winter crops, and they are now in the stage of planting the land, with fruit trees, such as: citrus, almonds, and guava. Advanced training specialized in agroecological cooperatives is also being provided. 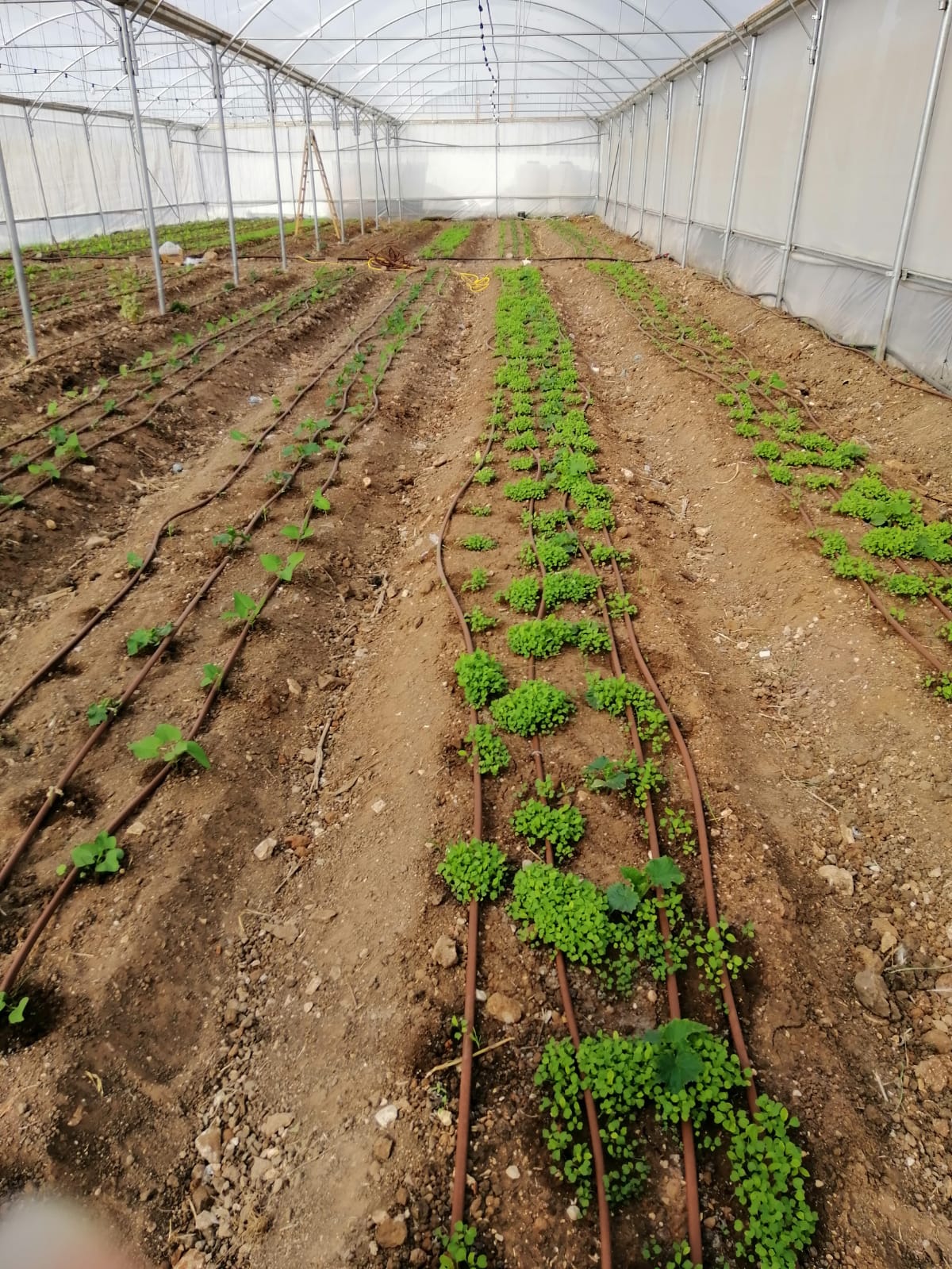 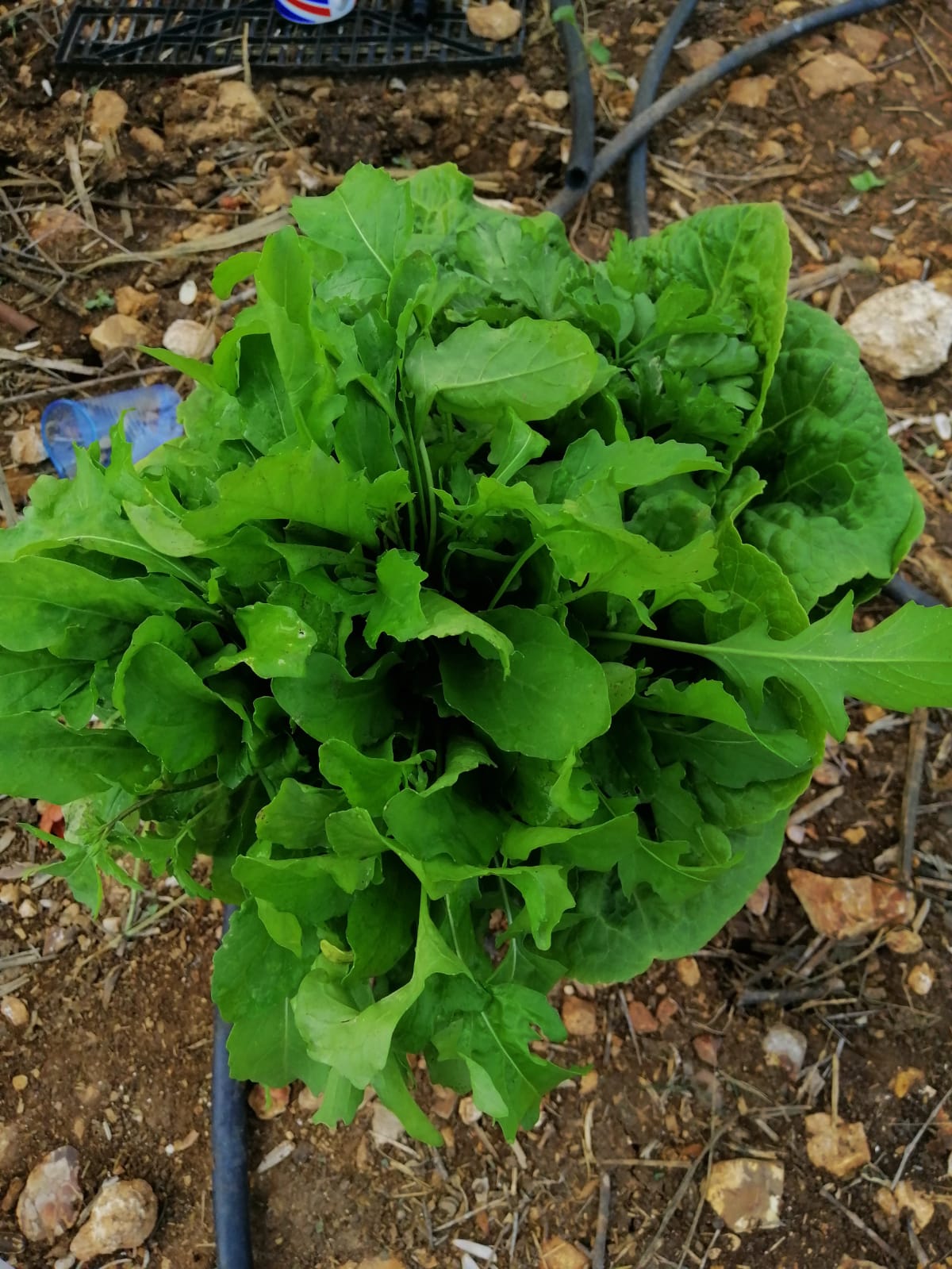 With their distinctive initiative, which aims to inspire the current generation to embrace scientific and technical disciplines and simplify them, and prepare them for future professions, by popularizing the methodology of integrating science and providing learning spaces based on an interactive methodology to integrate science, arts, and technology into the educational curriculum, and to train teachers in this regard. They have formed educational units, including the light and shadow unit. Now that they have received practical/theoretical training in the field of the Arduino circuit, the initiative will be able to implement the second educational unit, which is the Arduino unit. Designing the Arduino unit, so that they can then design the "educational bag", which is the summary, and overall goal, which will include all the educational units, which they hope to be able to provide for every male and female student in Palestine, in the future. 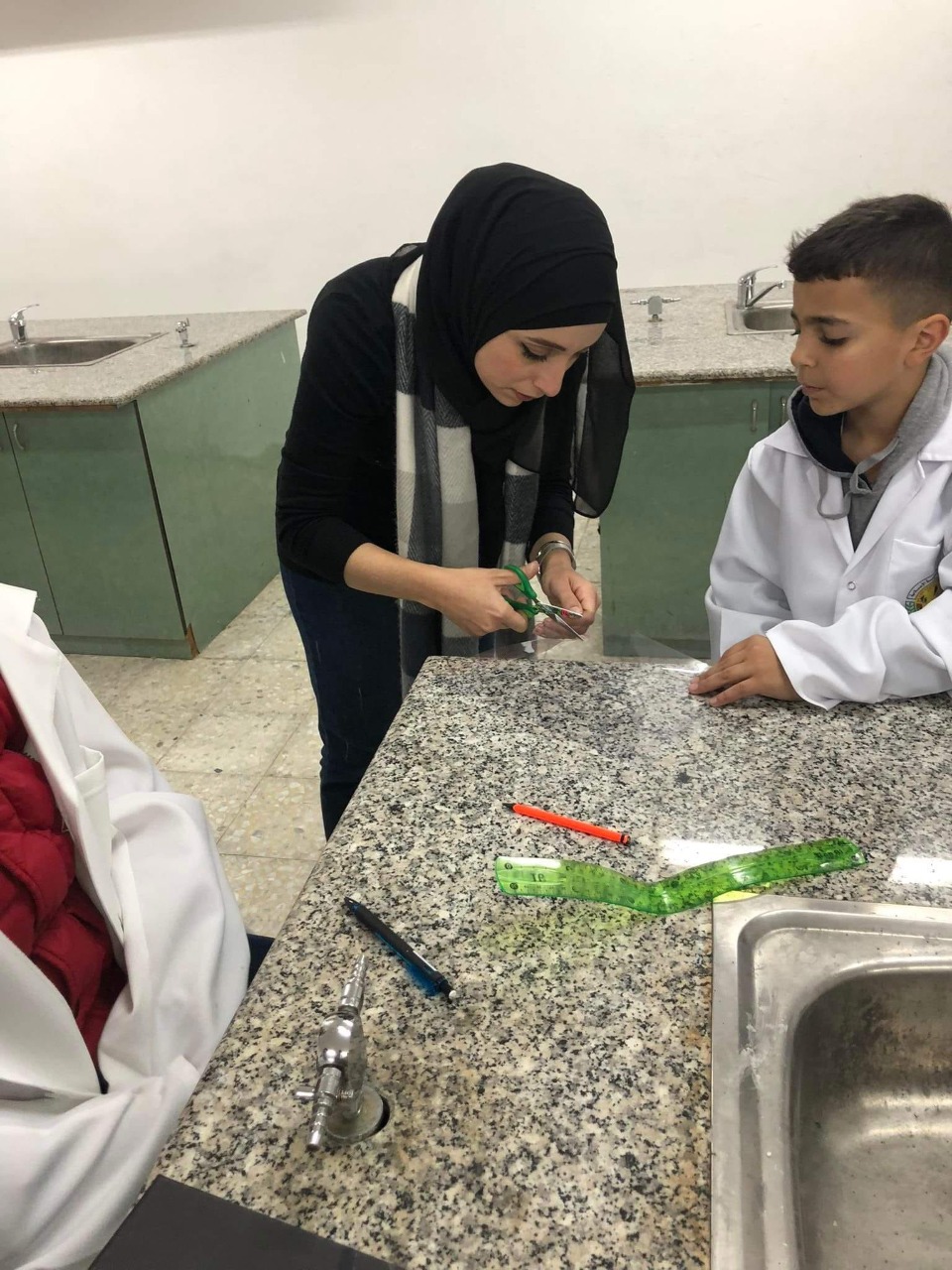 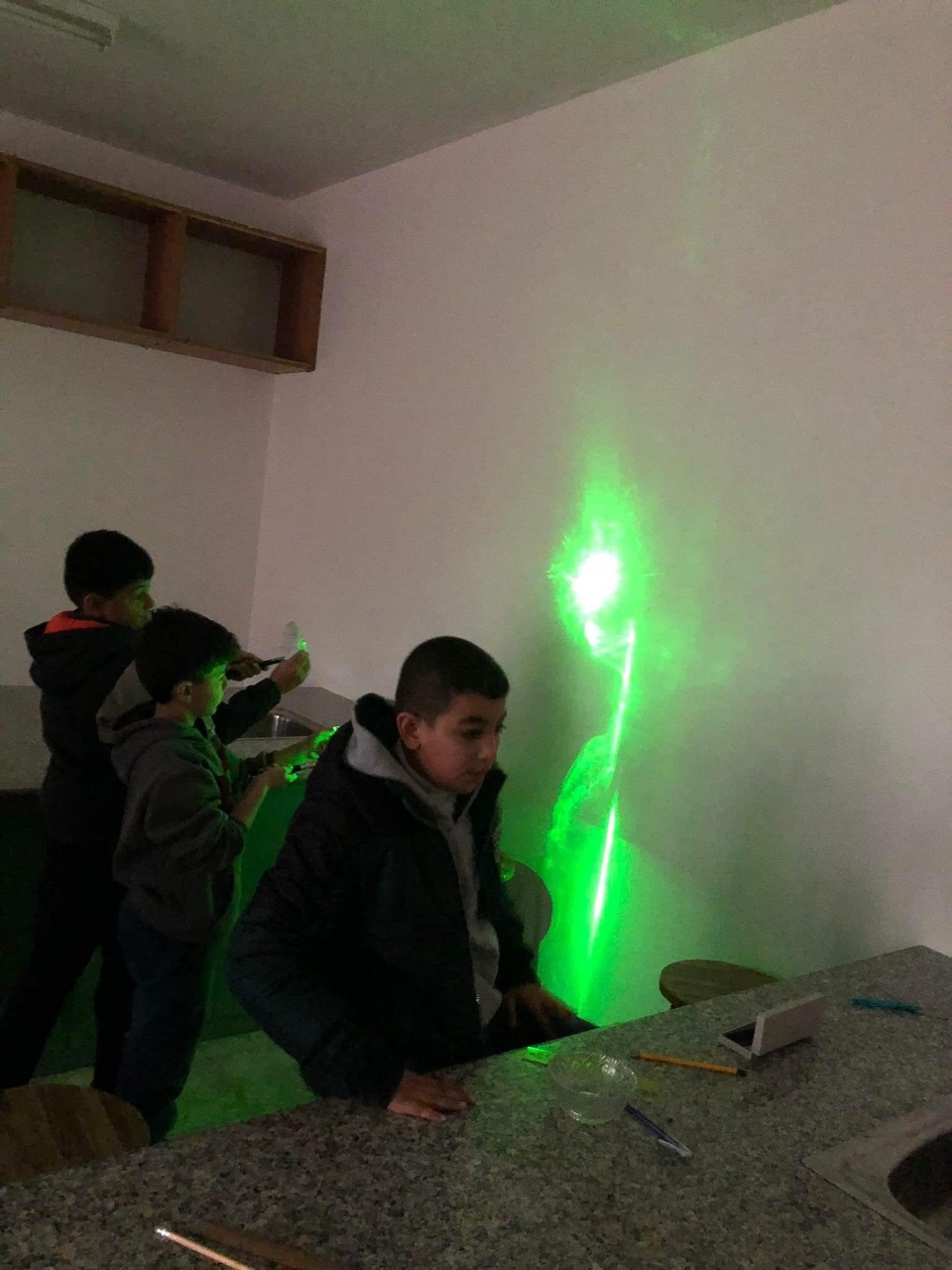 From the nature of their work, and their interest in preserving the Palestinian cultural architectural heritage, the leaders of the First Engineering Commune, who are engineers and architects with various specialties, seek to carry out various projects to preserve the cultural heritage, architectural and oral history in different regions of Palestine. They will first work in the village of Beit Anan, southwest of Jerusalem, and with an initiative, they called the Khirbet al-Jubay’ah initiative. In order to achieve their goal, they made several exploratory visits, to collect information about the archaeological buildings in the village, to learn about the tangible cultural heritage sites in the towns of Beit Anan and Beit Duqqo, to identify the candidate sites for work, and to understand the cultural and social nature of the mentioned towns. The group has prepared designs for preparation for its restoration, specifically the site Khirbet al-Jubay'a - Beit Anan, which is rich in architectural heritage. The Commune beliefs in community partnership to achieve development, and for this reason, it held several meetings with the municipality of Beit Anan to explain its objectives and to ensure the partnership of the people of the village using the concept of Al Ouneh, in addition to building a partnership with the Palestine Path project, which aims to put the architectural heritage on The map and the rehabilitation of his monuments cultural and historical. 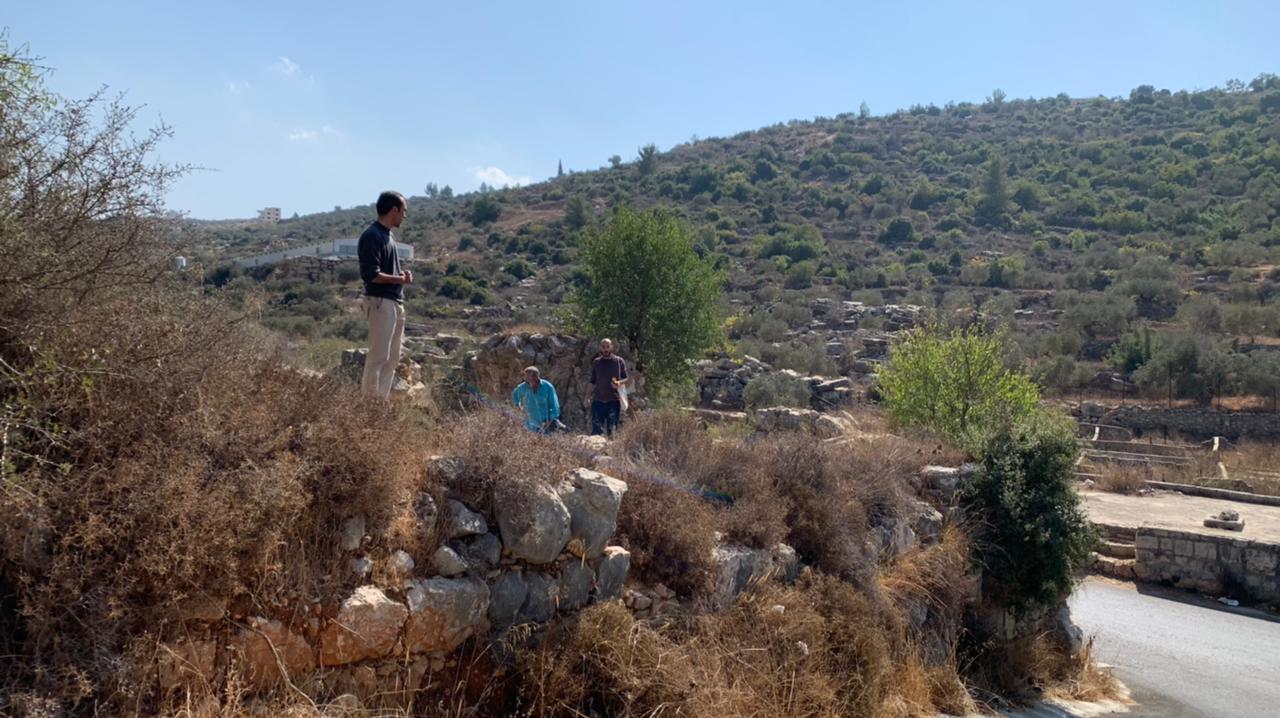 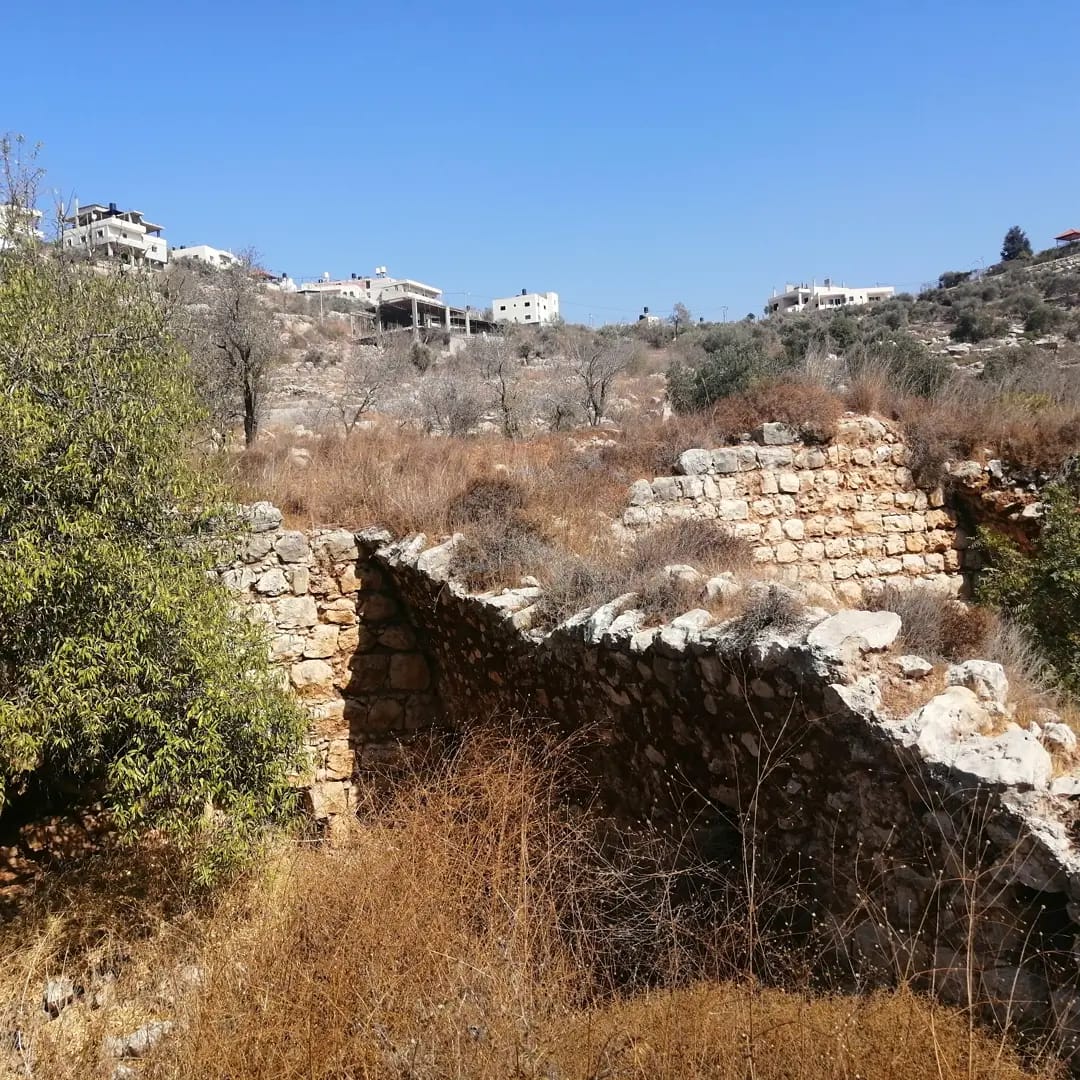 Bethlehem and Hebron governorates: Libraries, culture, and art are the three stars that light up the initiatives of the southern regions, which are the People’s Library, Rummana Library, Tashkeel Gallery, and the Children’s Village Youth Council.

The ideology of ​​the popular library is from the people to the people. Reading is a right and duty for every individual in society. Their motto: Donate a book and read a book. It is considered as a small step by a group of young people to spread awareness about reading and its importance in societies. The group was established at the end of 2019 in response to the social reality in the city of Beit Jala in particular and the Bethlehem governorate in general, which, like other regions, is witnessing a clear decline in volunteerism.

The group is now participating in a training:  "Classification and Archiving for Public Libraries" as part of the Giving for Change program grant, to acquire assistive skills in organizing the work of the library, in addition to working on and rehabilitating the place and the library. To ensure the group's continuity, there will be a small cafeteria where  members and the local community can enjoy a nice sitting area while reading a book, and as the saying goes: "The best companion in time is a book."

When the love of reading grows in the same girl from childhood, it grows to spread to all children after that, and this was the seed that founded the Rummana Library in  Wadi Al-Samen area in Hebron. The library mainly aims to create a safe space for children, through which they can express themselves and develop their personalities, and it also aims to restore the relationship between the child and the paper book, in light of the high prevalence of modern devices.

Library members are now participating in the training “Classification and Archiving of Public Libraries” training within the Giving for Change program grant, in addition to preparing an outdoor space through furnishing, for children to enjoy the beautiful spring and summer atmosphere and benefit from it in various cultural and artistic activities.

“Where are we concerning art? This is another question that led us to find our identity. We were never ordinary people who go to work, eat, just study! Art has been accompanying us everywhere” . Thus, the Tashkeel Gallery initiative was founded out of the passion of a couple and the freeing up of part of their home. The special program is to do various art activities for children with learning difficulties and to provide psychological, moral, and technical support to the mothers of the children to help them move forward in their own battle.

The initiative was able, to fully furnish the space,  and to implement a greater number of artistic activities for children and mothers within the grant from the Giving for Change project. The Tashkeel initiative is also participating in classification and archiving training for public libraries.

Nablus and Tulkarm Governorates: The initiatives of the North region came together to bring together the ideology of cooperative agricultural work k in the service of the community, through the two initiatives, Roots of the Juthoor Shams Cooperative and Creativity Without Borders.

Like other newly formed youth agricultural cooperatives, Juthoor Shams cooperative aims to encourage youth cooperative work, production, the return to the land, and build a Palestinian economy based on self-reliance. The team prepared the agricultural land on which the planting will be held, with an area of ​​7 acres, by cleaning and preparing agricultural and educational spaces to receive young people and visitors, implementing extensions and installing irrigation tanks with water along the area of ​​the land, in addition to installing greenhouses and others, with the participation of volunteers.  A visit to for other youth groups was also carried out with the participation of volunteers from the cooperative, where they planted beans for the winter. The visit included an explanation around the meaning of ​​cooperative work and its importance, how to promote for this concept, and the role of youth in making it successful in light of the decline in job opportunities and also the decline in cultural and agricultural interest in the land. 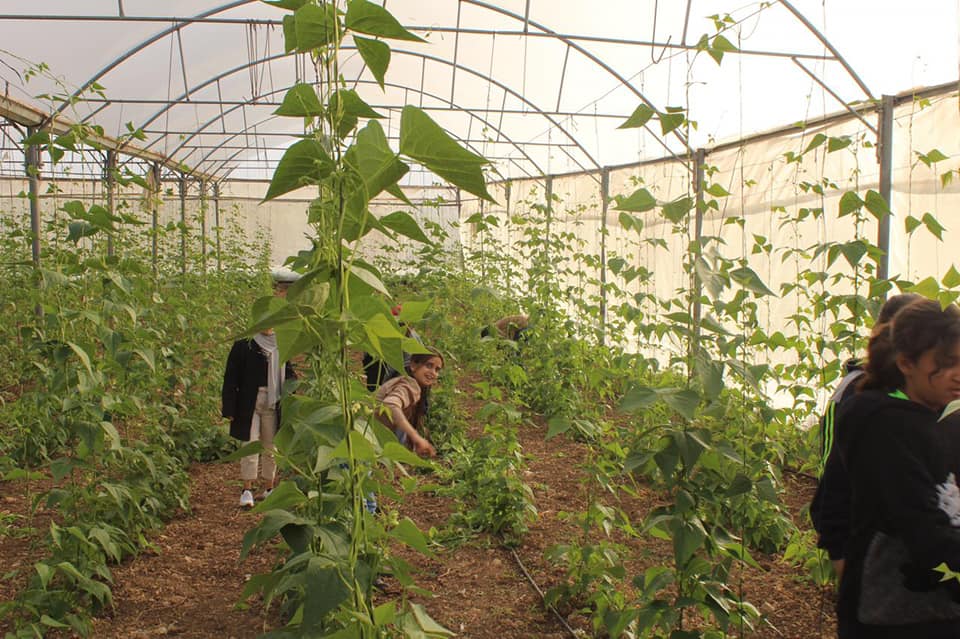 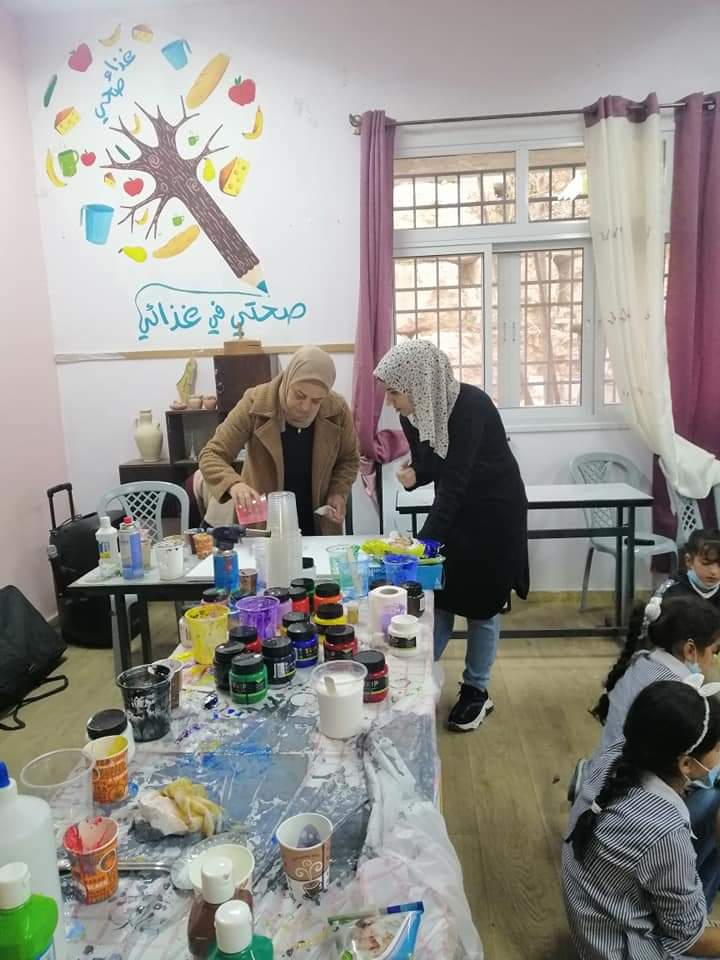 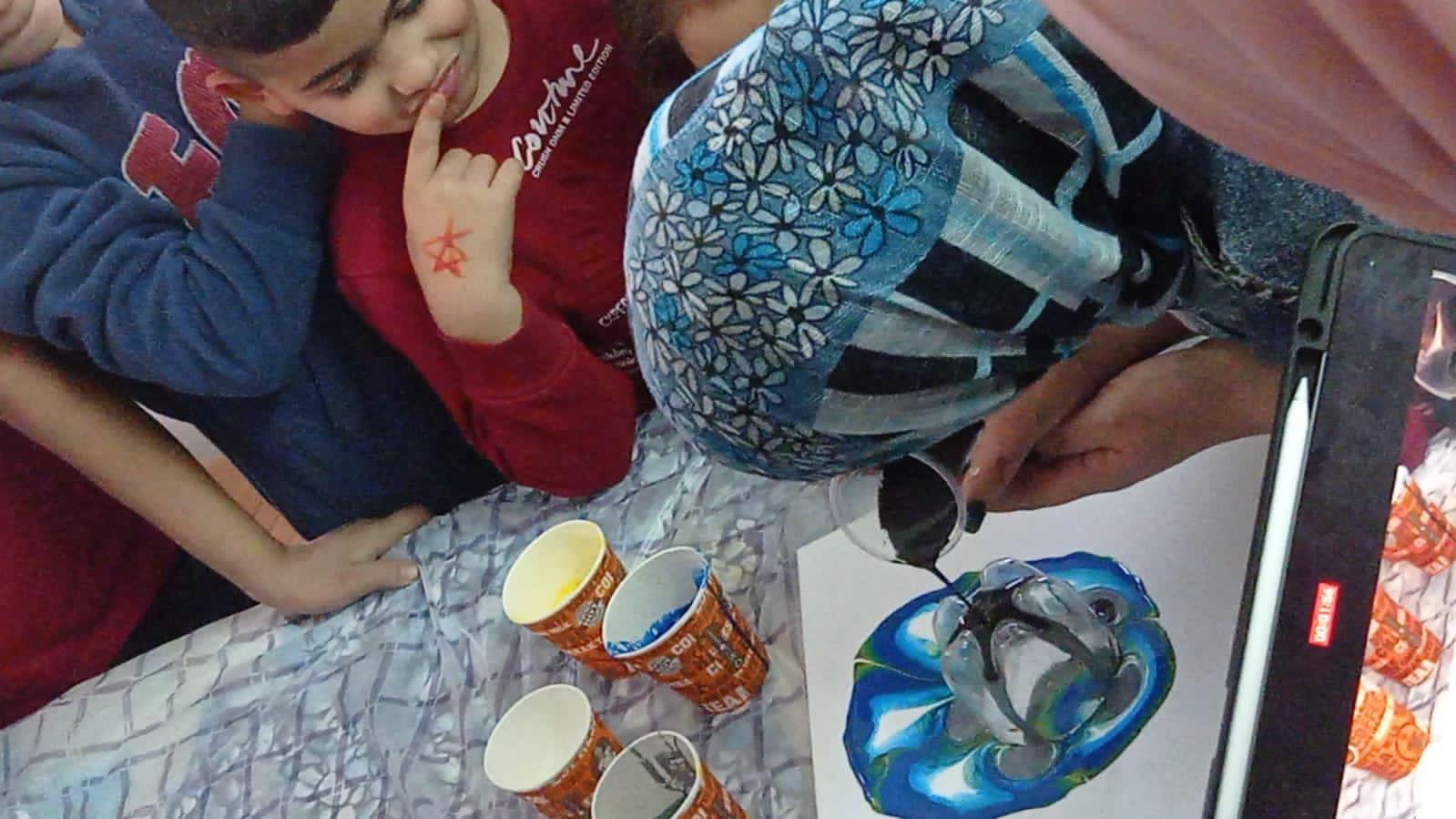